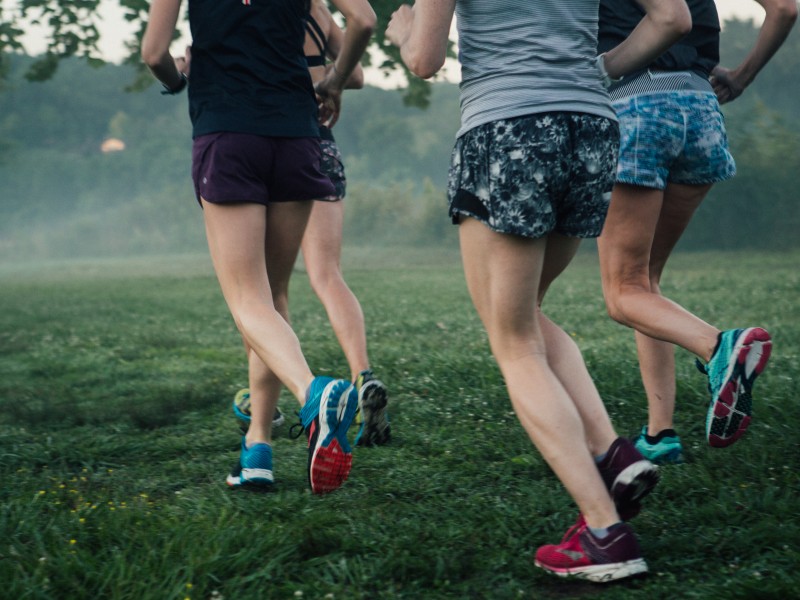 Mother runners, I’ve been around the block probably several thousand times. By that, I mean, I’ve pretty much been running for more than thirty years and I have made a lot of running mistakes. I started when I was about 6-years-old, running a little with my Dad and competing in fun runs. When I didn’t get a ribbon or trophy, he’d get me one. Needless to say, running made me feel pretty special. I was hooked.

I competed in high school but didn’t run in college on a team. Still, I ran on my own, completing my first marathon my senior year—aiming for a 3:30 and getting a 3:29, qualifying for Boston. I continued to run every single day after college while working in TV News, despite working on a midnight or 3 am shift. Running provided stability for me when I felt out of control of my schedule. I would wake up at 9 pm so I could run 10 miles on the treadmill before heading to the station. When I met my husband several years later, we would run all the time together upwards of 90 miles a week. Our idea of fun was traveling to marathons in beautiful places, running our hearts out, and then relaxing for several days afterward.

While being a “runner” was always part of my identity, I never knew much about proper training. For instance, my husband and I would regularly meet after work to run 16 miles, followed by stadium steps, and then go home to eat…wait for it…cereal. We didn’t fuel or take time to recover. We’d hit the roads hard the next day.

In 2018, after both my kids were born, I linked up with a coach Bobby Holcombe of Knoxville Endurance to take my running more seriously. Working with him and running with other experienced runners opened my eyes to A LOT of mistakes I had been making.

I’ve narrowed them down to my top five common running mistakes. I chose these mistakes because they’re detrimental to any runner: they hurt your performance and ruin the fun. While the actions come from a good place—you want to be your best running self—they are also rooted in fear which clouds your best judgment.

If you make these running mistakes, won’t succeed as a happy, healthy, or fast runner. So, if you do, check yourself. It’ll make your running better and much more satisfying.

Running Mistake #1: Comparing yourself to other runners.

While knowing what you run can be crucial for your training, putting it out there for the world to see can be dangerous. It tempts you to run faster or farther than you should to essentially show off to the running world: Cue Ron Burgandy from Anchorman, “EVERYONE. LOOK HOW AWESOME I AM!” Even more dangerous is looking at other people’s runs and comparing your performance to theirs.

There have been so many times that a run I was proud of was dampened by looking at other people’s similar runs. When I was training for an Olympic Trials Qualifier (OTQ), I’d compare workouts of other runners’ with OTQ goals and all faith in my training would be lost. This does nothing but fuel negative thoughts. “I will never be as fast as her.” “I will never get my goal.”

Running is an individual sport with SO MANY VARIABLES. It shouldn’t matter what other people are doing. What matters is that you are showing up, running smart, and doing your best…every day. Easier said than done, I know. But if you stop being a slave to Strava, you’ll be a better and HAPPIER runner for it. Guaranteed.

Check yourself: When you start perusing Strava, think about your intention. Is it to encourage fellow runners or see how you measure up? If it is the latter, stop scrolling.

Running Mistake #2: Not eating before and/or after a run.

Until I was 37, I NEVER thought about fueling for running. In fact, I viewed running as a way to eradicate what I ate. So why would I eat to run? I run to eat! HUGE MISTAKE. Especially if you want to perform well and not be a miserable mother…and runner.

When I started training more seriously, I didn’t understand how I could be expected to run intervals one day, run a long run the next, and then turn around to do more intervals. Who could possibly be recovered enough to do that? Turns out, pretty much everyone can—if you eat right. When my coach started asking me what I was eating before and after my runs, I was shocked that I should be eating anything at all. My kids were young, so getting out to run needed to take as little time as possible—no time to eat and run!

When I started viewing food as fuel, my running transformed. I recovered faster. I ran faster. And, I had more energy to be an awesome mom to boot.

Here’s what you should be eating:

Check yourself: Ask yourself if you’re eating to run or running to eat. If you’re running hungry, or even allowing yourself to get hungry throughout the day, you need to eat more.

Running Mistake #3: Not listening to your body.

You know that saying, “listen to your body’s whispers before they become screams”? There’s nothing truer than that for a runner.

For the past year, I’ve been battling a hamstring injury. This would not be the case if I listened to my body early on. The injury started after I tripped on a broken road. I ignored it and continued to run the highest mileage weeks of my life. I believed that every mile would get me closer to achieving my OTQ time. Therefore, I was terrified of taking any time off. Each run I deluded myself that it was feeling better when my leg continued to feel worse.

Even after confirmation of a hamstring tear and running the marathon in utter pain, I continued to train. After my failed OTQ attempt, I had something to prove. I needed redemption. Needless to say, it eventually became clear that I would never be the runner I wanted to be if every step was painful. Now, I’m months into a recovery process that would have been much shorter had I listened to my body early on.

Runners need to push through pain, but we also need to know what pain is worth pushing through: If you have a nagging injury that has hurt for several days and gets worse as you run, you need to stop running and possibly see a physical therapist. This also goes for illness. Many times, I felt like I was getting sick but opted to ignore my symptoms in favor of a run. I’d come home, tipped over the edge, and much sicker than if I’d played it safe and rested instead.

Not listening to your body most likely will result in taking more time off in the long run. When in doubt, hedge your bets: taking a couple of days at the first sign of trouble could save you taking a couple of months off—or more.

Check yourself: Ask yourself if taking a day off will help your long-term goal. If an extra day or two of rest can stave off an injury or illness, then the answer is, yes it will. Don’t be short-sighted.

Remember when I said that being on Strava makes you want to “show off” and prove to everyone how awesome you are? That means you likely push the pace on runs where you should be running easy. Even before Strava I would make this mistake because I was competitive with myself. Every run had to be faster and farther than the one before.

Running too hard on easy runs is detrimental for a couple of reasons. First, it robs your body of recovery. Running hard stresses your muscles, ligaments, tendons, joints, and bones. It creates little tears in soft tissue that as heal back stronger. They can’t do this if they’re worked hard day after day. Instead, they’ll continue to break down eventually resulting in injury.

Another reason running easy is important is that a slower pace allows biological magic to happen. Easy runs at a conversational pace allow your body to grow its capillaries and mitochondria, the vehicles for supplying fuel (oxygen) to your working muscles. Run faster than easy and this growth is stalled. Running easy also lets your body get better at burning fat, letting you run longer.

A good rule of thumb is to go really hard on your hard days and run really easy on your easy days. You earned that easy and you’ll end up being a faster, stronger runner for it.

Check yourself: If you tend to run too fast on easy days, ask why. Is it because you are showing off or you’re afraid of losing fitness? Remind yourself that easy running builds your engine.

Related: 9 running hacks that are worth your time

Running Mistake #5: Not believing in yourself.

When I was in high school, I was sitting at the dinner table with my family discussing an upcoming track meet. I was saying how I was doubtful I would get the time I wanted (I think I was trying to break 60 seconds in the 400 meters). Instead of encouraging me, my dad looked me in the eyes and said: “You’re right, Whitney. You’re a loser.”

Before you get the wrong idea—my dad has always encouraged me and told me he was proud of me every day. However, that never worked to make me believe in myself. So, he tried another tactic, reverse psychology. I remember my coaches trying all sorts of tactics too—a heartfelt card, a stern pep talk, a lie about hearing the other team trash talking me.

Related: How to overcome imposter syndrome

Not believing in oneself can cause self-destruction. If you don’t believe you can reach your goals, then every workout, every family sacrifice, every early morning run is a WASTE OF TIME.

Throughout the 7 months that I trained for an OTQ, I never believed I could accomplish it despite the people who knew me and my running best telling me it was possible. I doubted every workout. And believed that other people doubted me, too. It became a self-fulfilling prophecy: The trip that hurt my hamstring happened WHILE talking to my friend about how I didn’t think I could run a sub-2:45 marathon. That trip and a bad attitude led me to run 11 minutes off an OTQ time–AND deal with the injury still a year later.

The power to believe in yourself is the most important quality a runner can have. Because when the going gets tough in a race, a workout, or just the grind—that is what will keep you going. So, do whatever it takes–start a positivity journal, visualize your goal, review your training logs, or get a life coach—to bolster that belief so you can accomplish all you’re capable of doing.

Check yourself: Ask yourself if you truly believe you can achieve your goal. If you don’t think you can, look for evidentiary support. I bet you won’t find any.

Join my mailing list & get your weekly checklist to NEVER MISS A RUN! Plus, get exclusive content straight to your inbox that'll help you be the BEST mom & runner you can be!