When I run, I like to imagine that I glide effortlessly across the ground like Shalane Flanagan. But I have a feeling this is not the case. And, recently, a gait analysis confirmed my suspicions.

Last year I saw a news video of me running. My gait, or the manner in which I run, was uneven and looked as if I was hobbling. Honestly, it kind of messed with my mental game. I didn’t look like the strong, powerful, fast, efficient runner I thought I was or wanted to be. Instead, I looked like someone who just got off a horse…who also had a run-in with Tonya Harding. How could I be fast? How could I run a 2:44 marathon with a stride like that?

A month later, I suffered a hamstring injury that was sparked by a trip on a broken-up road but was also possibly brewing for some time. My gait analysis also confirmed this.

Related: Lessons Learned from my Injury

What is a gait analysis?

Every runner has their own gait or style of running. There’s a good chance people who have seen you run can tell it is you from yards away. And, while you may have your own way of running, abnormalities in your gait may cause injury or make your running inefficient. These are big reasons why I got a gait analysis.

What is a normal gait pattern?

There are two phases of the gait cycle.

The Stance Phase when the foot is in contact with the ground; and the

Swing Phase when the foot is not in contact with the ground.

Generally, there are 4 subphases in your gait cycle:

Mid-Stance. This is when your foot flattens on the ground, supporting your body as it moves forward over the leading foot while the other foot is in swing phase.

Toe-Off/Propulsion. This is when your foot kicks off after the heel is off the ground and ends with the toes leaving the ground.

Swing Subphase. This is when your foot is not in contact with the ground, instead, it is swinging forward. This swing phase accounts for 60 percent of your gait and isn’t really relevant for injury prevention since there is no weight being borne.

Related: How to Fix Your Running Form 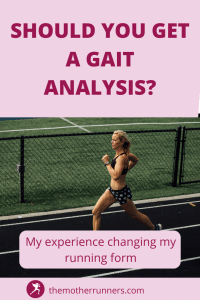 How is a gait analysis performed?

A gait analysis is often informally performed at shoe stores to decide what kind of running shoe you need—and usually just looks at how your foot rolls (in or out). It can also be performed by a physical therapist or running expert who watches you run on a treadmill or studies a video of you running.

My gait analysis was done by mother runner and physiotherapist, Janet Yiu, of 3-drunner.com. I “met” Janet via Instagram and saw she offered a $25 gait analysis. All it required was sending her side-view videos of me running from the left and right. (You can see one of them here.)

I was hesitant to do it at first for the same reasons why you don’t want someone to tell you that your skirt is tucked into your pantyhose or that you have a large piece of spinach stuck in your teeth. I knew this knowledge was important to rectify the situation, but it is also embarrassing for my own self-image.

Yet, I faced my fears and sent in the videos because the positives far outweighed the negatives.

Why you should get a gait analysis

A gait analysis is a powerful tool for a runner. Here is why:

It’s important to note perfecting your gait overnight is not possible and trying to do so will likely result in injury. But a gait analysis can help you pinpoint trouble spots and provide you with a routine to help address the problem areas.

One quick glance at my video and Janet responded, “You’re injured on the right side, correct? I can see why.” A day later she sent me a video reviewing my running videos that pointed out my biomechanical abnormalities. I had a suspicion about some of them because of that news story and people’s comments on my form, but I wasn’t sure what negative impact they had or how to correct them.

Everyone has their own unique gait

That’s where Janet comes in.

Her gait analysis was like looking into the future. My imperfect running form could lead to a lot of potential injuries like labral tears, hip lesions, ITB syndrome, and ankle and shin issues, not to mention the hamstring and quad running injuries I’m already struggling with.

The good news is that while my right side was really messed up, my left side has minimal issues. Also, it is important to note, that even elites (except for maybe, Shalane) don’t have a perfect stride either. A 2018 study found that people’s natural style of running is likely the body’s way of adapting to its most efficient style of running. However, sometimes these abnormalities can reap harm over time because of the repetitive nature of running.

And, sometimes being a long-time runner can work against you. I have been running for almost 33 years. Most of this running has been done without prehab or rehab, strengthening or running drills. Thus, minor abnormalities over time become ingrained and result in inefficiencies and injuries.

Here is a summary of my gait analysis from Janet:

Janet gave me a couple of pre-run stretches to do to increase hip mobility which would address most of these problems. She also suggested I get with my physical therapist for additional hip and core strengthening exercises which I have done. My physical therapist cautioned that I don’t make too many changes, noting that I’ve run a lot of miles over the years and drastically trying to change one’s gait can contribute to injuries as well.

Thus, my plan moving forward is to strengthen the hips, increase mobility, and focus on shorter strides and a “quieter” footfall.

Janet said in 2 to 3 weeks, I should notice a difference in my gait.

Over the next two weeks I perform the following to improve my running form:

I then submit new videos to Janet and she finds that my overstriding issue has been corrected. However, my pelvis is still tilted on the right side. As she explains, “This puts your hamstring in a position to work harder. I also notice the posterior pelvic tilt from the lack of rotation inward of the thigh on the right side.”

She also found that my right side collapses in when I run which means my adductors may need some strengthening.

Thus, I still have work to do.

I will continue what I have been doing and focus on strengthening my back and adductors. I also purchased the book Running Rewired by Jay Dicharry which guides runners through rewiring their bodies for better form. A change isn’t possible overnight–but it is possible!

You, along with my husband, maybe asking–why? Why try to have a perfect running form? It can be easy to say, let’s forget this and just focus on running. Certainly, there are plenty of fast people who run funny. But, I want to run pain-free. And, while it is not clear if my hamstring injury came from an imperfect form or it bred imperfect form, it is clear that these current issues will lead to injury over time. And after not running for four months, I want to try to run injury-free for as long as I can.

So, can a gait analysis fix your running form? Maybe–it can certainly help you! But you got to be willing to put in the work. In a couple of weeks, I corrected a long-lived problem of overstriding. But other issues (like a pelvic tilt) will take more dedication and patience: something us mother runners are used to.