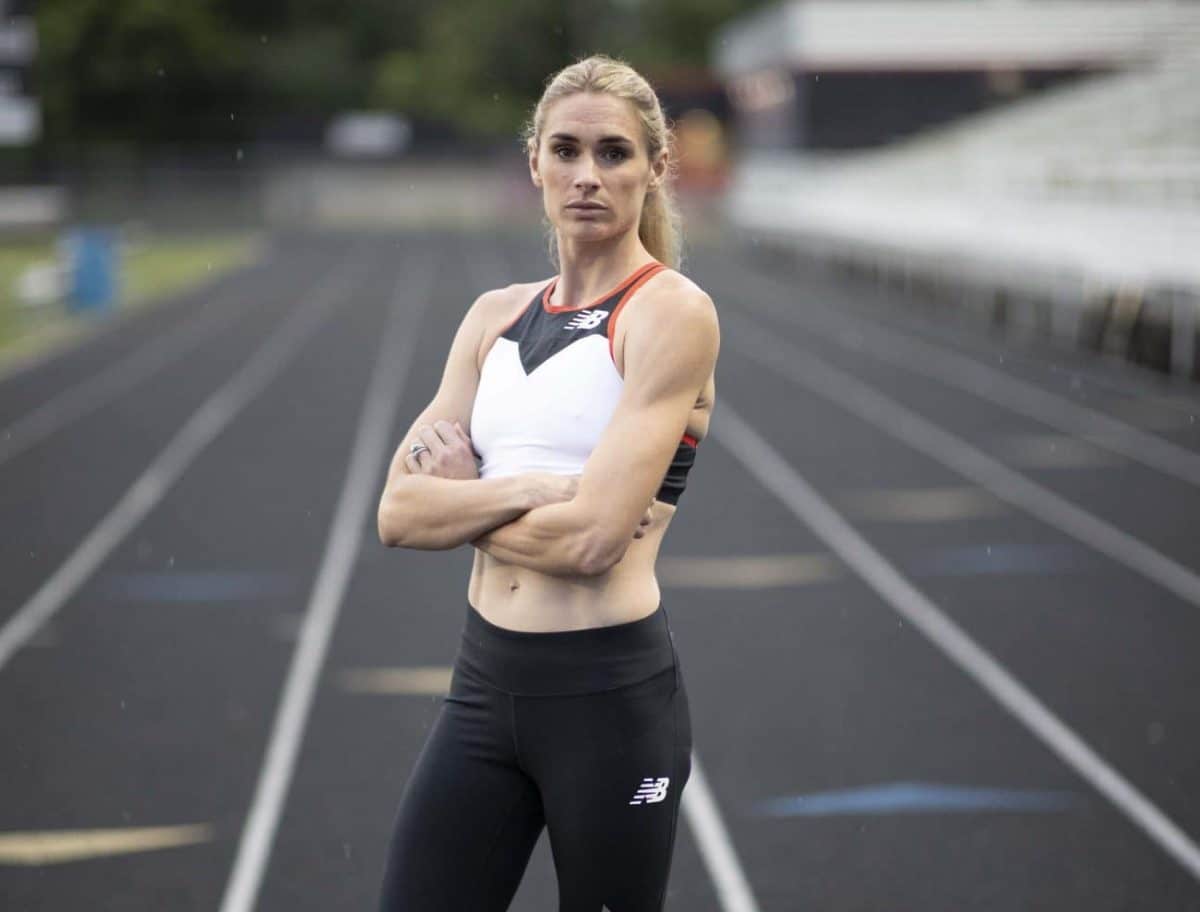 Sarah Brown was one of the top milers in the U.S. and, until earlier this year, ran professionally for New Balance. But you may know Sarah as the focus of the documentary debuted at the Tribeca Film Festival and aired as an ESPNW series, called “Run Mama Run.” The documentary details Sarah’s journey to the Olympic Trials 16 weeks after giving birth to her first baby girl, Abigail, in 2016.

As if nursing a baby around the clock and grinding out physically demanding workouts weren’t enough, Sarah suffered from postpartum osteoporosis leading to two cracked vertebrae and a broken hip. Yet, she continued to nurse her baby girl—leaching calcium from her bones to give to her baby—and train, toeing the line at the trials for the 1500 meters. Sadly, during the prelims, Sarah’s Achilles tendon popped and her heel broke. 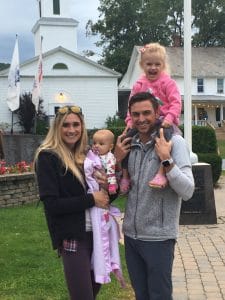 Sarah Brown with her family

Sarah underwent reconstructive surgery and continued to compete for New Balance with her husband, Darren (once a pro runner himself), as her coach. After becoming pregnant with their second daughter, Isabelle, born in April 2019, Sarah decided to retire.

But Sarah did not hang up her running shoes. She still runs but now it’s on her terms. If she feels like a progression run that day, she’ll do it. If she wants to run easy, she can. Sarah also coached a high school cross country team outside Boston where she and her family now reside.

Sarah ran for the University of Tennessee in Knoxville, where I live, and I would often see her and Darren gliding down the road at lightning-fast speeds they made look effortless. I was able to catch up with her by phone as she made, once again, a hard task—diverting her attention away from her two small children to talk to me—seem effortless.

Sarah’s dedication to both her running and children is—without a doubt—inspiring. But what I admire most is that when the two come in conflict, she knows where her heart truly lies.

Sarah trained pretty hard while pregnant so that wasn’t starting from zero after having Abigail. She learned a few things along the way:

Be flexible. Sarah says, “Things can change so quickly when you’re pregnant. Some days can go from good to bad or bad to good very quickly. Listen to your body.”

Stay consistent in footwear. “I didn’t change my shoes to run in racing flats or any other shoe. I did all my workouts in my cushioned trainers for the added support.”

(Check out my article on running while pregnant for more tips.) 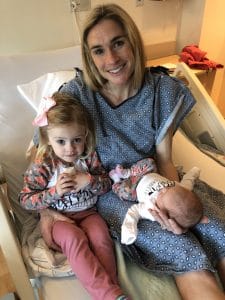 Sarah shortly after giving birth to her second daughter.

Sarah took a week completely off running after giving birth. She then cross-trained for 3 weeks before running. (Everyone is different, so please consult your doctor and listen to your body before resuming running!). While getting back to running, Sarah focused on:

Get a splint.“I ran in FIT splint while pregnant and postpartum for several weeks. It provides the total core body support that you’re lacking. It helped me feel secure and supported.”

(Check out more tips on running after baby here.)

Sarah folds her girls into her exercise routine as much as she can. 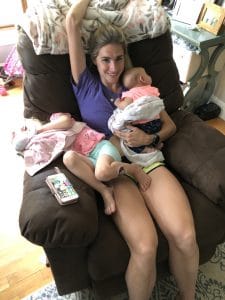 Sarah Brown and her daughter.

Toddler-stage. The Browns’ workout equipment is at the back of a room full of toys and a TV. While she’s running, her girls play near mama. Sarah will load songs onto an iPad for her girls to listen to and is able to hop off the treadmill if necessary to grab a pacifier or snack. Her oldest, Abigail, will watch Sarah run and cheer her mama on. Baby gates are set up around the equipment to keep little fingers from getting squished.

Baby-stage. Sarah has a pack n’ play for her youngest that she rotates special toys in so the entertainment is always fresh. She also has a mamaRoonearby that can be controlled by smartphone so she can change the setting if Isabelle gets fussy. Sarah also knows how long Isabelle will stay entertained with a certain toy. For example, a walker will give Sarah about 30 good minutes of exercise.

As every mom knows, doing something for herself can come at the cost of feeling guilty or selfish because it means time away from the kids. Sarah now aims to get her exercise done early in the morning before Darren leaves for work and her kids wake up. She has found that “If I can do something for myself that makes me feel good, then I can be better prepared for the things that motherhood brings that day.”

Being a mom and runner never seem to be more at odds than when you have a sick child who needs you around the clock. In those moments, that’s when the mom role always wins, says Sarah. “All of a sudden, it’s so easy to prioritize. I know where I need to be. It’s not even a question.”

Sarah says she doesn’t have guilt about missing a workout and, if she ever did, Darren is quick to remind her that a single workout is never make-or-break. 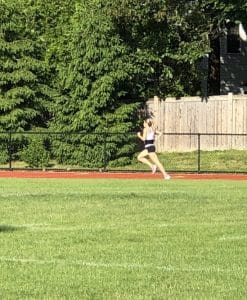 Sarah Brown on the track

When Abigail was really little, the Browns had a babysitter that would watch her while Sarah ran around the Harvard University track. If Abigail got upset, Sarah would involve Abigail in the workout like having her bring a water bottle or give a high-five.

“I know I’m mixing business with pleasure, but that’s part of what motherhood is,” shared Sarah. “Motherhood is pushing you out of your comfort zone and what better way to do that than face it every day.”

Because of her postpartum osteoporosis risk, Sarah alternates running with cross-training. Every other day, she hops on the ElliptiGO or bikes on a trainer using the Zwift app which she loves because it helps improve running turnover. During her pro running days, she strength-trained using circuits twice a week and yoga once a week. Now, Sarah sporadically fits in bodyweight exercises throughout the day to keep her core strong and bones healthy.

“I usually try to do yoga or core with the girls. Abigail likes to join in sometimes and I just try to catch Isabelle when she is willing to play contently with her toys on the floor beside me,” shared Sarah. 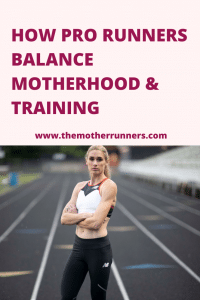 Learn from pro runner Sarah Brown how she balances training with motherhood.

While Sarah’s list of running accomplishments is long, she’s been dealt with many hard blows. An injury robbed her of making the Olympic team in 2012 and again in 2016. But since becoming a mom, she doesn’t take the disappointments as hard because motherhood has put running into perspective.

“One bad running moment doesn’t change anything,” she says. “I’m still me. I still have two kids and a husband who need me. This mentality not only allows you to be able to move past disappointment, but it allows you to take more risks without added pressure. Life continues moving forward whether you run a PR or not.”

Growing up with two parent-athletes, Abigail knows exercise as something mom and dad do, kind of like eating and breathing. While only 3, she already has an interest in running. “She’ll act like she’s in a starting block and run laps around the house and has me time her,” says Sarah. “If anything is a competition, she’s all for it.”

Sarah says running has impacted her in such a positive way and brings so her joy that she’s thrilled to be able to share it with her girls. 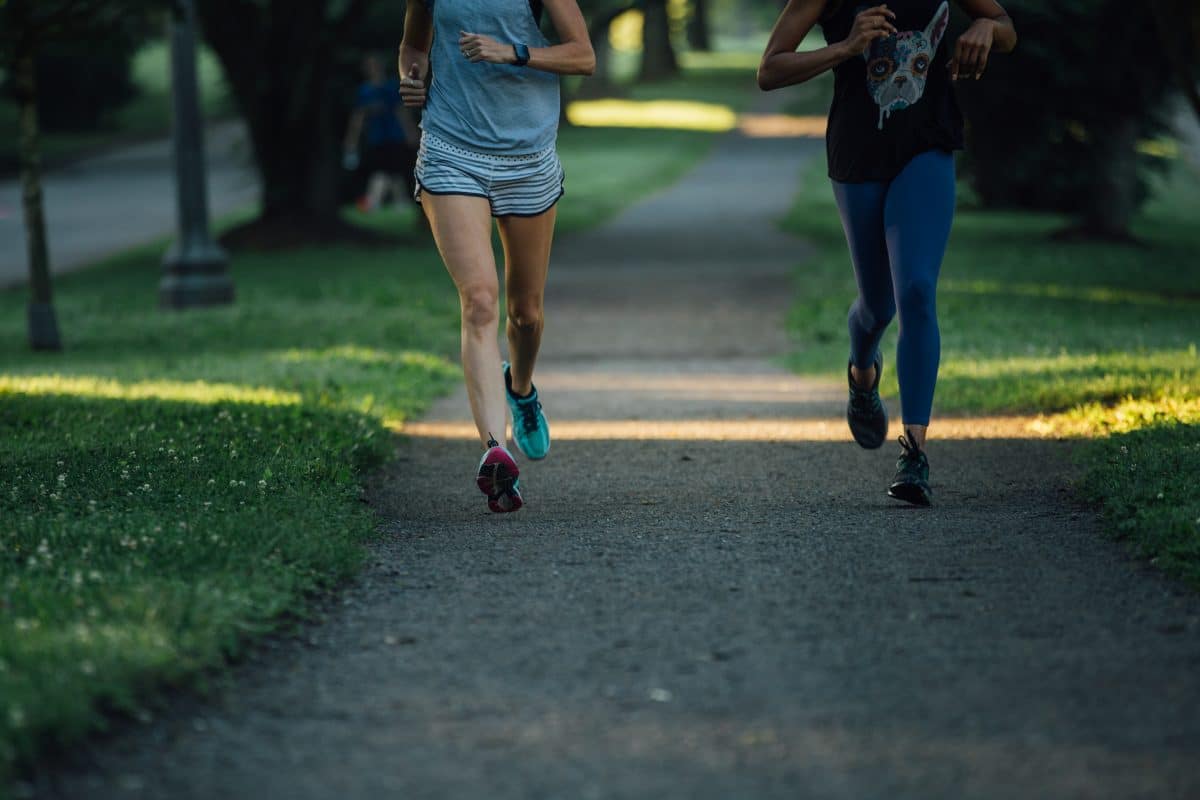 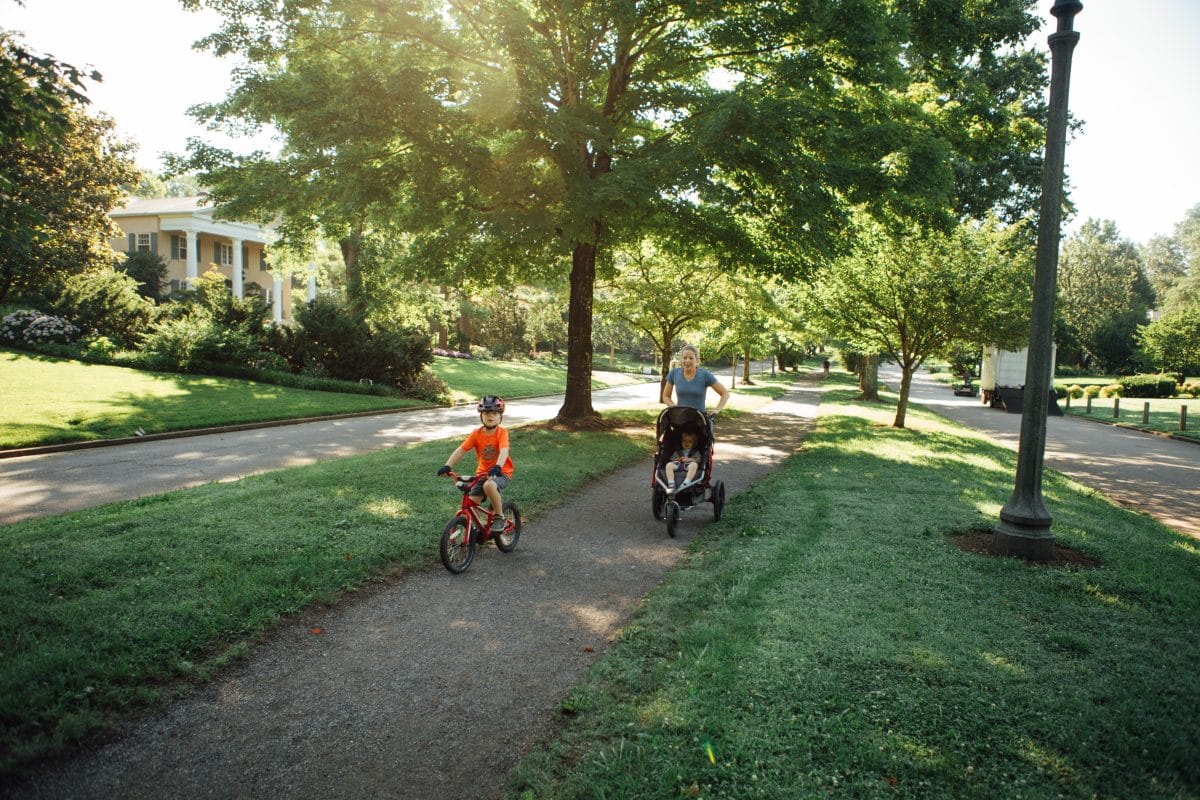 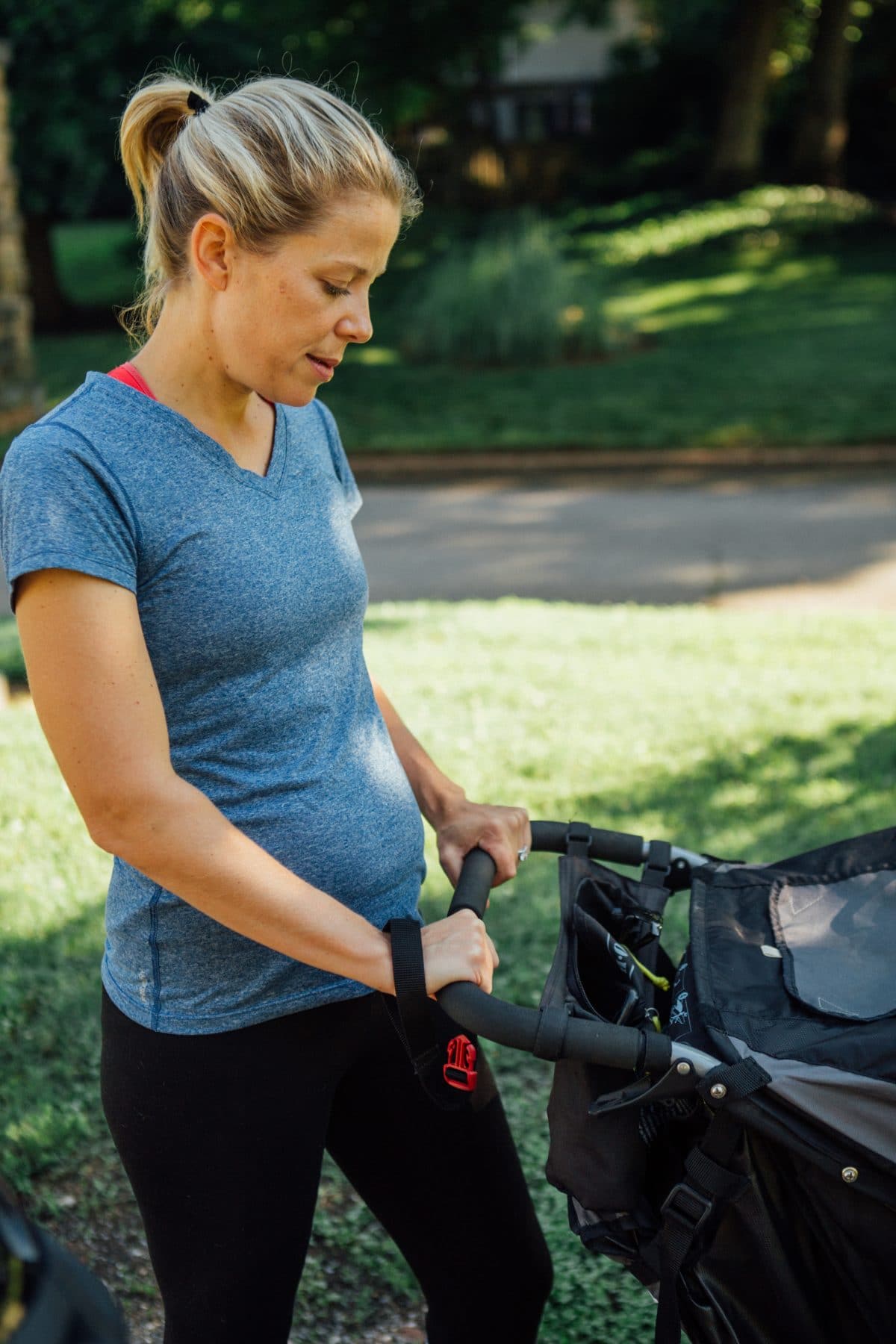