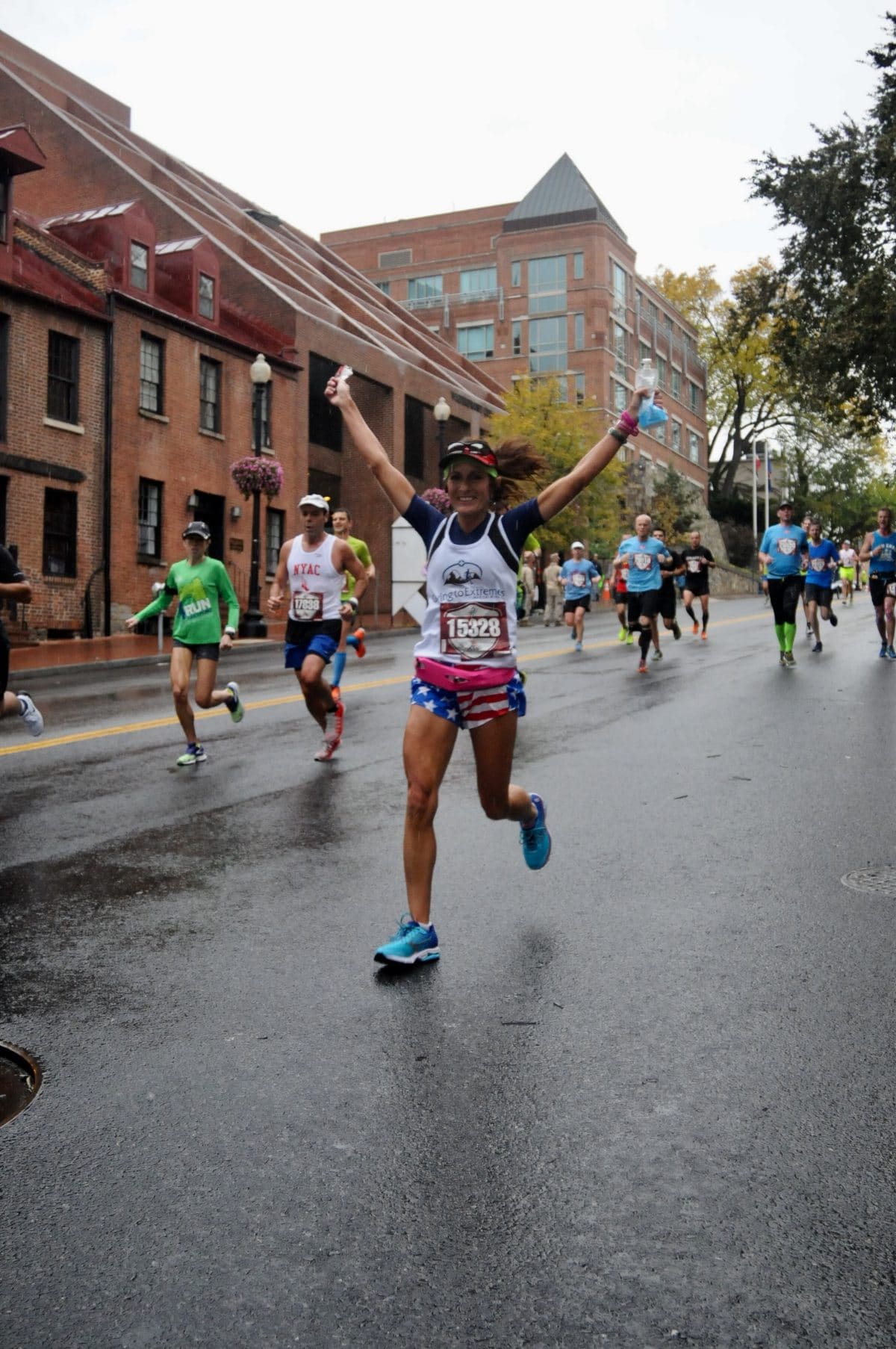 I remember the first time I met Connie Dickey. I had just crossed the finish line of the Knoxville Marathon in 2019 in second place but a minute shy of my sub-3-hour goal. She came right up to me and was bubbling with congratulations and enthusiasm. Her first words were, “Whitney, you can take ten minutes off your time because of how challenging that course is.” It was the perfect thing to say (whether true or not) to assuage my disappointment. I realized then, that if you ever need a pick-me-up, call Connie. She always sees the bright side of things. 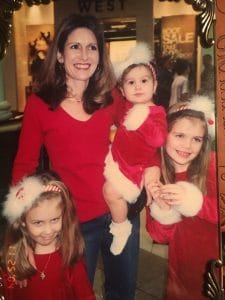 Connie Dickey didn’t know she had Lyme disease before she became a mom.

That includes dealing with her own challenges—and she’s had a major one. One day Connie started feeling really bad—her symptoms got worse and worse. She underwent a battery of tests for years and they all came back negative. She had doctors tell her to toughen up. She persevered with positivity despite feeling terrible (while caring for three young children). One day the mystery was solved. She had Lyme disease.

Connie shares her powerful story below including tips on how you can stay safe and how she credits her disease with giving her the gift of running (another great example of how she always sees the glass half-full).

Connie lives in Friendsville, Tennessee, outside of Knoxville. She worked as a registered dietician before having her three daughters, now 21, 19, and 16. She had always been interested in exercise and nutrition and would occasionally go for a jog. It was on one fateful run in 1994 that her life would change:

“On one of my jogs, a summer storm popped up and I ran through some weeds to seek cover under an abandoned boat dock.  Several days later, I noticed a weird rash on my leg. I didn’t think much about it because I didn’t have any serious symptoms right away.  I thought…probably some kind of spider bite. However, looking back, I know now that was probably the day that Lyme disease began to take a foothold in my body.”

“Several weeks later, I came down with the ‘Summer Flu.’  I thought, no big deal…. this happens sometimes. Strange symptoms slowly began to emerge, but they were gradual. (Symptoms like a stiff neck, migraines, weird crawling sensations on my skin). Time marches on and I put up with the symptoms because they just didn’t seem connected in 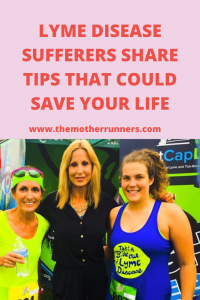 Simple steps like tick checks and avoiding tall grasses could save you from getting Lyme disease.

any way. I looked healthy on the outside, too. So, what’s to worry about?

“Well, then I started having kids and after each birth, I became sicker and the pregnancies were downright miserable, and the last pregnancy baffled my very experienced ob-gyn. I was so sick with her and I had pregnancy-induced hypertension (supposedly) and started retaining a lot of fluid.

“I weighed 190 pounds at admission and blood pressure of 200/100. That’s a lot for me! We had to deliver her almost 4 weeks early and I just wasn’t recovering even after the delivery. I was readmitted to the hospital and underwent every test imaginable. They did the best they could. Every test was coming back negative, yet I had some miserable symptoms (headache, drenching night sweats, paralyzing chills, stiff neck and spine, profound fatigue and all of that extra fluid!). They just couldn’t do anything else for me.

“I was sent home on blood pressure meds and other meds to control the pain. Meanwhile, I have a newborn, a 3-year-old and a 5-year-old. They saved me from going crazy, though. I absolutely had to take care of them!”

“I was sent to all kinds of doctors and was prescribed all kinds of meds to try and manage the symptoms. A rheumatologist diagnosed me with Fibromyalgia in 2004. For the next three years, I did everything the doctors said—took all the meds hoping it would help. My symptoms worsened, though. 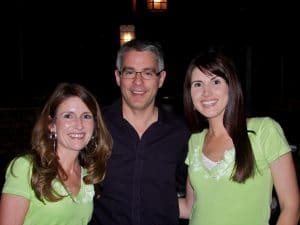 “The migraines were becoming a daily battle, the drenching night sweats and chills were disrupting my sleep for years. The pain …constant neck and spine pain were just sucking the life out of me. I finally asked my rheumatologist in 2007 if there could be anything else wrong with me: Something more serious than this fibromyalgia? How could I feel so bad? I was only 41! He said, there’s nothing else wrong with me and that I needed to put on a brave face and be grateful that I didn’t have rheumatoid arthritis-like some of his other patients.

“I felt awful after that appointment. Defeated.  I began to question myself. Am I a baby? Am I making a big deal out of nothing? That was a terrible day! My husband couldn’t believe it. He was at home watching the kids and he could not believe the doctor talked to me like that.

“Oh well, I thought, okay…this is my lot in life. I have to find a way to be okay with all of these symptoms.  Well, my ob-gyn knew my tolerance to pain (ha) and he wanted to send me to the Mayo Clinic.”

“At the same time, a friend of mine showed me an article about Lyme disease. I couldn’t believe it. It was like I wrote the article myself. It described me to a T.  I asked my doctors around here to test me, please. Could I have Lyme Disease? I was dismissed. They said there is no Lyme in Tennessee.  Defeated again!

“Well, I had a choice to make. I found out about an out-of-state doctor who was helping patients with Lyme Disease and doing some testing. I could go see him (he was relatively close) or go to Mayo in Minnesota. Honestly, the thought of managing the care for my kids while traveling to Minnesota was daunting. 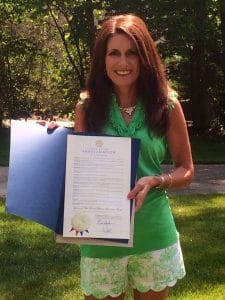 Doctors told Connie there was nothing wrong with her. A friend helped solve the mystery. Connie is shown here with the official Tennessee proclamation of Lyme Disease Awareness Month (May).

“I was going to save that for my last act if needed. I chose to visit the doctor who was just across the border from Tennessee. Well, all the blood work came back positive for Lyme disease and several other tick-borne diseases (Babesia and Bartonella). (If you have ever had Babesia, you cannot donate blood per the guidelines).

“This doctor was an MD, but he also used a lot of herbals and nontraditional medicine. I was game! I was so sick and tired of being sick and tired and taking all kinds of pills that were not helping me to get better. They were band-aids, I’m thankful for the pain management, but I did not enjoy all the side effects of pain pills and antidepressants that were prescribed for patients with FM back then.

“This new doctor helped me detox my body and kill a lot of bacteria! I had infectious diseases that were invading my nervous system and my organs. I was going downhill. I really started feeling better after about 6 months of treatment, but still had some fighting to do.  I continued the battle and began to get my life back. I was bitten by another tick, though.

“What? Yes. This time, I needed more help. I saw another doctor and began IV antibiotic treatment in 2012. (It was in my brain and causing memory loss and a lot of nervous system problems).

“I still struggle sometimes with word loss, inability to multitask and lack of focus…not too bad, though! I had a PICC line (Peripherally Inserted Central Catheter) for ten months, followed by another year of pulsed oral antibiotics and now I’m on a maintenance protocol to manage the bacterial load before it manages me!”

“At that time, I was running about three miles three or four times a week. She told me she was running a half marathon in Farragut, Tennessee in October and that I should sign up, too. I thought, yeah, right…lol…that’s a long way! Well, she planted the seed and I couldn’t stop thinking about it.

“I bit the bullet and signed up for my first race ever and I fell in love with running that cold day in October 2014 at the inaugural half marathon in Farragut and crazy enough, I ran the Foothills half-marathon the very next day. 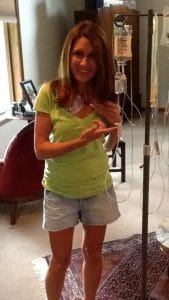 “Then, I started thinking maybe I could run a marathon, and wouldn’t it be cool if I could qualify for the Boston Marathon someday! I started running half marathons and was so excited to be running! It was so much fun and the other runners were always so encouraging! I fell in love with the sport and the people. And, if it weren’t for Lyme Disease, I may have never known about all of these races and the entire running community!

“I did get lucky and qualified for Boston in 2015 right here in Knoxville. Pure joy that day.  It meant a lot to be able to do something like that after being too sick to even walk a mile.

“I clung to one particular Bible verse throughout my Lyme battle and throughout running my first marathon. It was Matthew 19:26, ‘With God, ALL things are possible.’

Connie has since dedicated much of her life to raising awareness for Lyme disease as much about the disease isn’t known: She was incorrectly told that it wasn’t in Tennessee. Her doctors were wrong. Lyme can be anywhere. Ticks prey on people and birds—and people travel and birds migrate.

“You have to be your own advocate for your health. I never gave up even after feeling so defeated and even embarrassed! I wanted answers. I knew I wasn’t depressed, and I knew my pain and symptoms were real. Lyme Disease and other tick-borne diseases can mimic many autoimmune disorders including but not limited to fibromyalgia, rheumatoid arthritis, Multiple Sclerosis, Lupus, ALS, Parkinson’s Disease, and more.

“It’s so sad that many people are suffering with these disorders when Lyme disease may be underlying their disease.  It happened to me.  The testing is inaccurate.  The test that is done is called a Western Blot followed by an ELISA test. It has a 60 percent false-negative rate. It’s all very confusing. 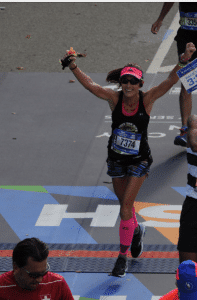 “A friend of mine has been able to pass laws in other states that require a doctor to tell the patient that even though the test is negative, it may be a false negative. So, that’s a little progress. I had a few western blot tests that were negative, too. I also had a positive test but was told it was a false positive. So, hmmm…There is a lab in California called Igenex that does some accurate blood tests for Lyme and coinfections. They can also test ticks for peace of mind, if you ever have a tick bite.”

Connie warns, “Don’t let this happen to you or your kids.” Here are her Lyme disease prevention tips:

“I never forget what it feels like to be a prisoner of your body and I’m always ready to help someone who may be afflicted with the same disease.”

Don’t let this happen to you. For more information about Lyme Disease, visit The National Capital Lyme Disease and International Lyme and Associated Diseases Society. 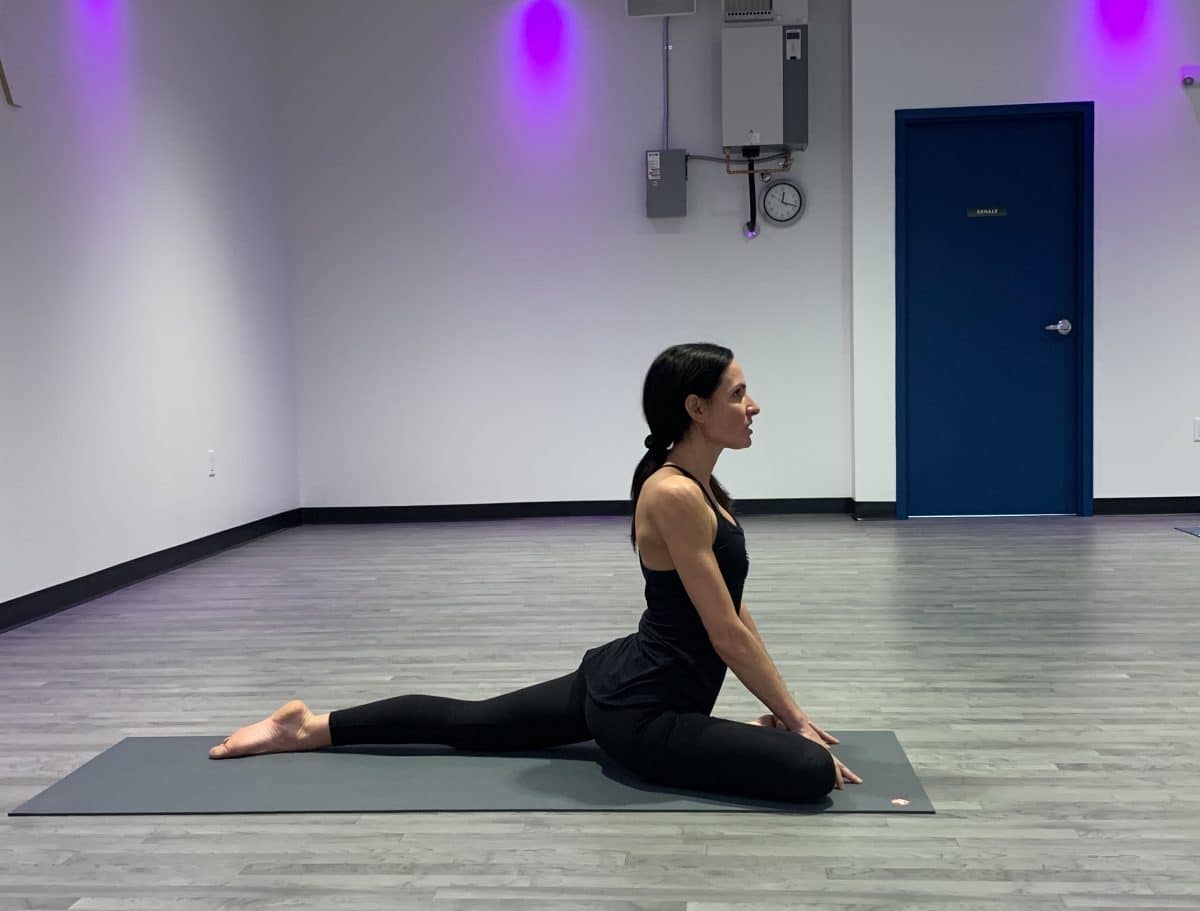 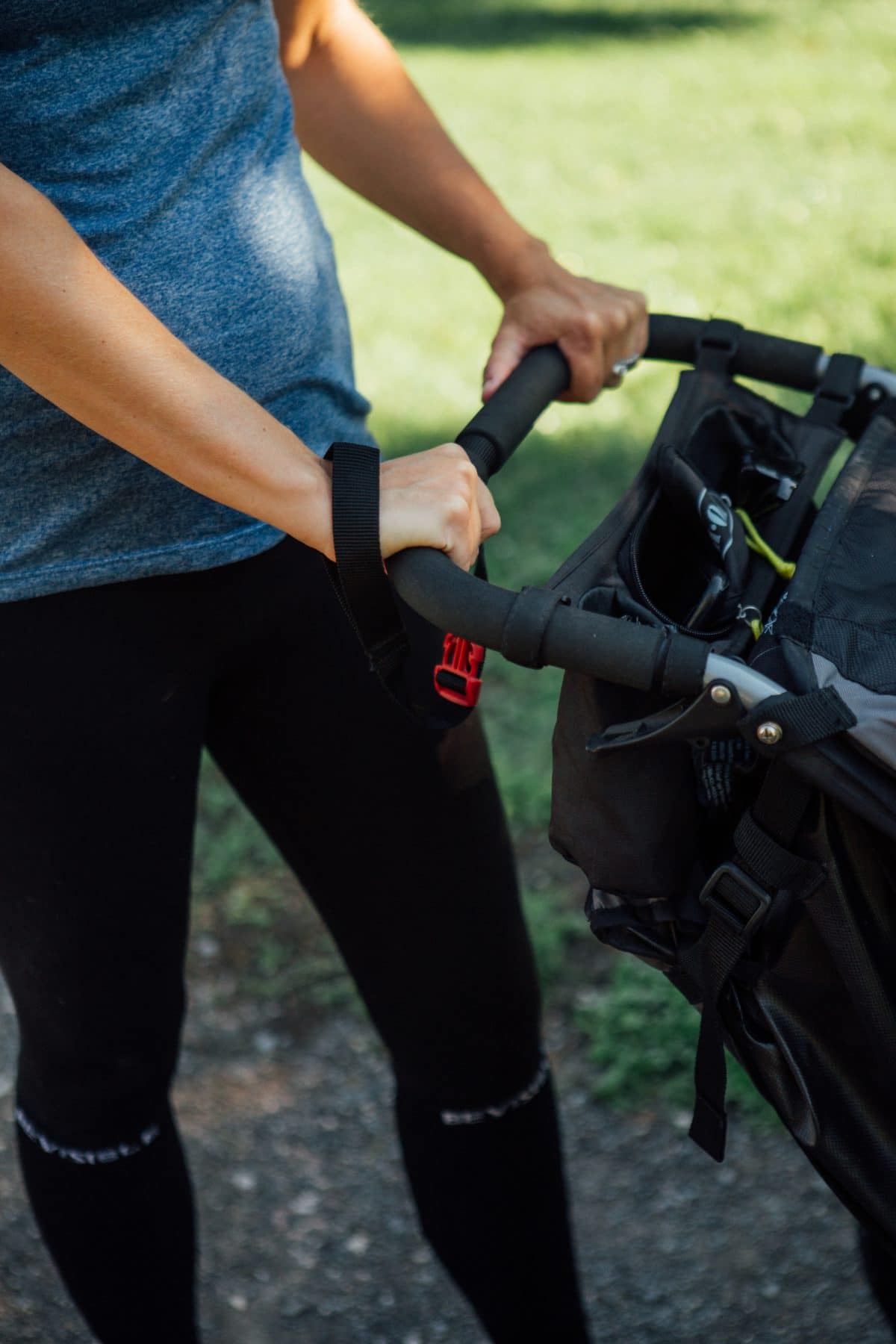 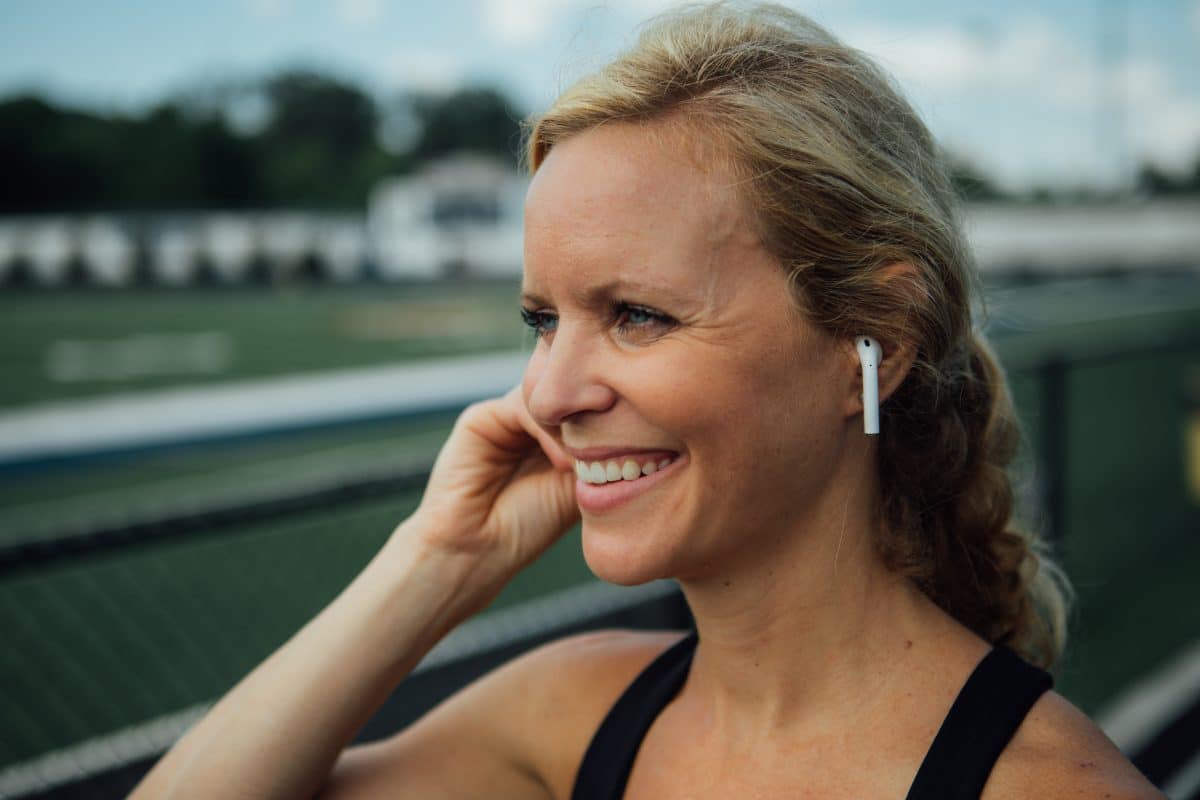